I’m a working mum and I’m studying part-time at Whitley. It’s a busy life. But I’ve found real authenticity in the lives of the lecturers at college, and I’ve experienced the outworking of that in the classroom. My name is Lauren O’Connell and I’m doing a Masters of Theological Studies. 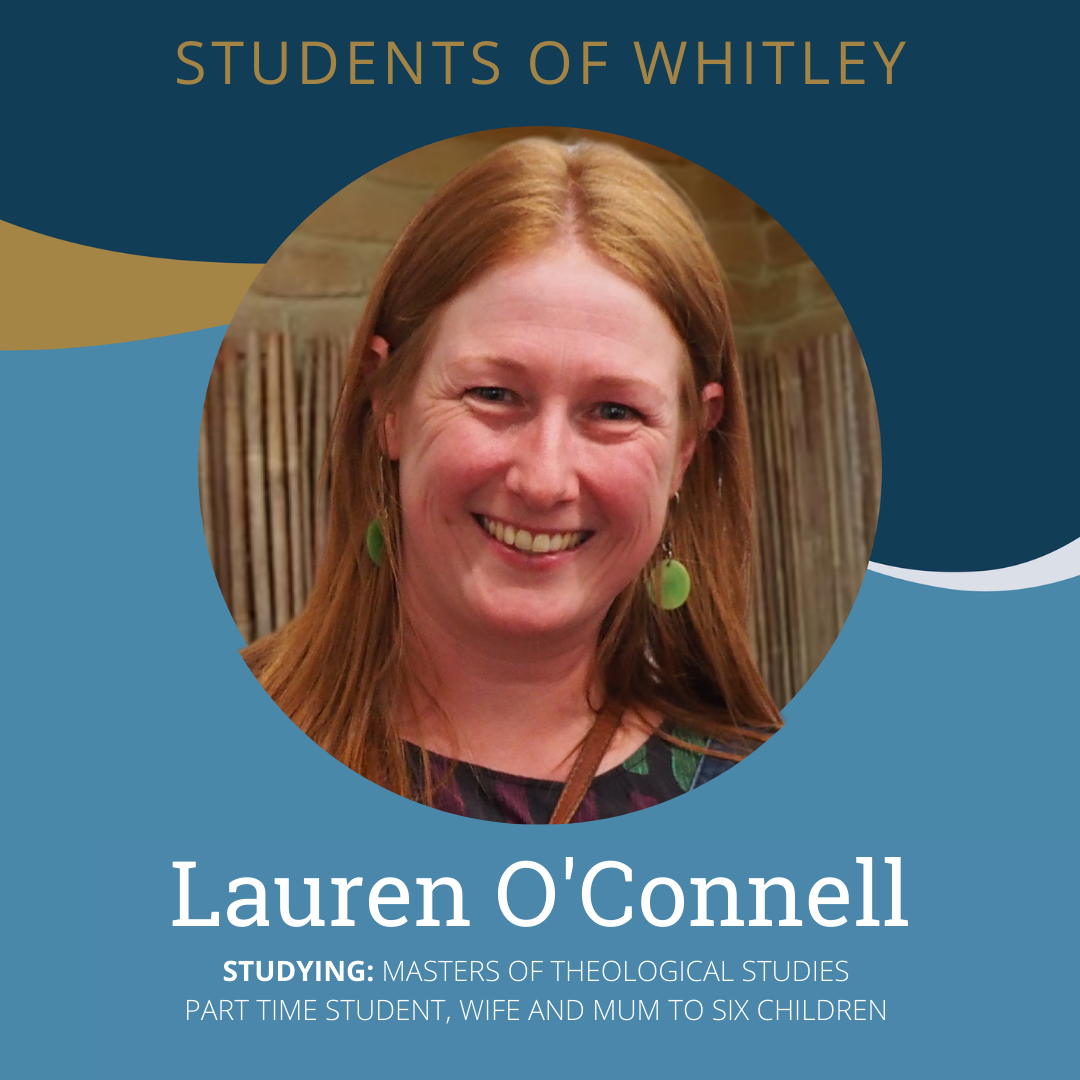 When I first came to Whitley, I thought I’d do a few subjects, maybe some intro classes to the Old and New Testaments, and then I’d be done.

But I’ve done seven units so far and I haven’t even moved off the Hebrew Bible yet! And I cannot see a situation in which I would not want to know more . . . to dig deeper. I mean, the Bible is a rollicking good read!

My name is Lauren O’Connell. I’m studying a Masters of Theological Studies and I’ve been a part-time student at Whitley since 2018.

A friend and former Whitley student suggested I go to the college. I was that annoying person in Bible study who would say “hang on, what about …,” or “what in the name of all things holy just happened!”

I have an undergraduate degree in History and Literature, and a Masters in Editing and Communications, so I was never going to come to the Scriptures and simply say, “well that makes sense.”

Perhaps that’s why I was problematic in Bible study!

I’m also a wife, mum to three daughters, and stepmum to three boys. Also, my mum was recently diagnosed with dementia and I spend time with her. My life is wonderfully full.

I’ve heard it said that studying the Bible will ruin your faith. And I suppose that’s because you’re invited to encounter the text beyond a purely literal reading, and to explore its contexts, genres, and reception history. You move beyond a ‘the Bible says’ mentality.

But this has not ruined my faith at all. Quite the opposite: it has enriched my faith. It has provided me with a firm foundation with space for my lived experience, and to mingle with these ancient texts and the lived experience of others. My faith is more generous and deeply rooted.

If I had to describe Whitley in one word it would be ‘authentic’. They practice what they teach. The faculty members I’ve studied with are outstanding academics and gracious teachers. They embody their faith. Whitley is an academically rigorous and pastorally nurturing environment. I can see why it has formed people of such high calibre.

I would like to give a shout out to lecturer Megan Turton. During lockdowns she completely restructured the classes so well that I actually preferred to take them online! She understood the challenges of remote learning and adjusted her lesson plans. She knows her stuff. I can’t rave about her enough.

And, also Mark Brett, who is staggeringly brilliant. If you ever get a chance to take a class with him: run, don’t walk.

Being at Whitley has impacted my family life, as I tend to spend a fair bit of my non-work time studying. My kids would say that’s one of the downsides.

One of the upsides is that I’m learning alongside them. They’ve seen me wrestle with conjugating Hebrew verbs, wailing about how I’ll never understand them. Then, very slowly, I get the hang of it. I think that modelling has been valuable, particularly when we were all remote learning. But they rarely ask me about the Bible because they know they’ll either get a 15-minute ramble or, worse, a very helpful, “Great question! What do you think?”

Finally, I would say that as a student at Whitley I don’t think it’s enough to be able to read the text well and provide a good exegesis. I think Whitley’s real goal is to form people of generous character who live lives of embodied faith.

All of the academic knowledge and biblical exegesis works towards that purpose. It’s not just about the theory. It’s a way of living. And this is absolutely central to what the people at Whitley do and how they do it.