“I give thanks to God for my 82 years and the journey that has been mine – I am convinced that living as “a follower of Jesus” is the way to live – for me and for everyone in the world.” 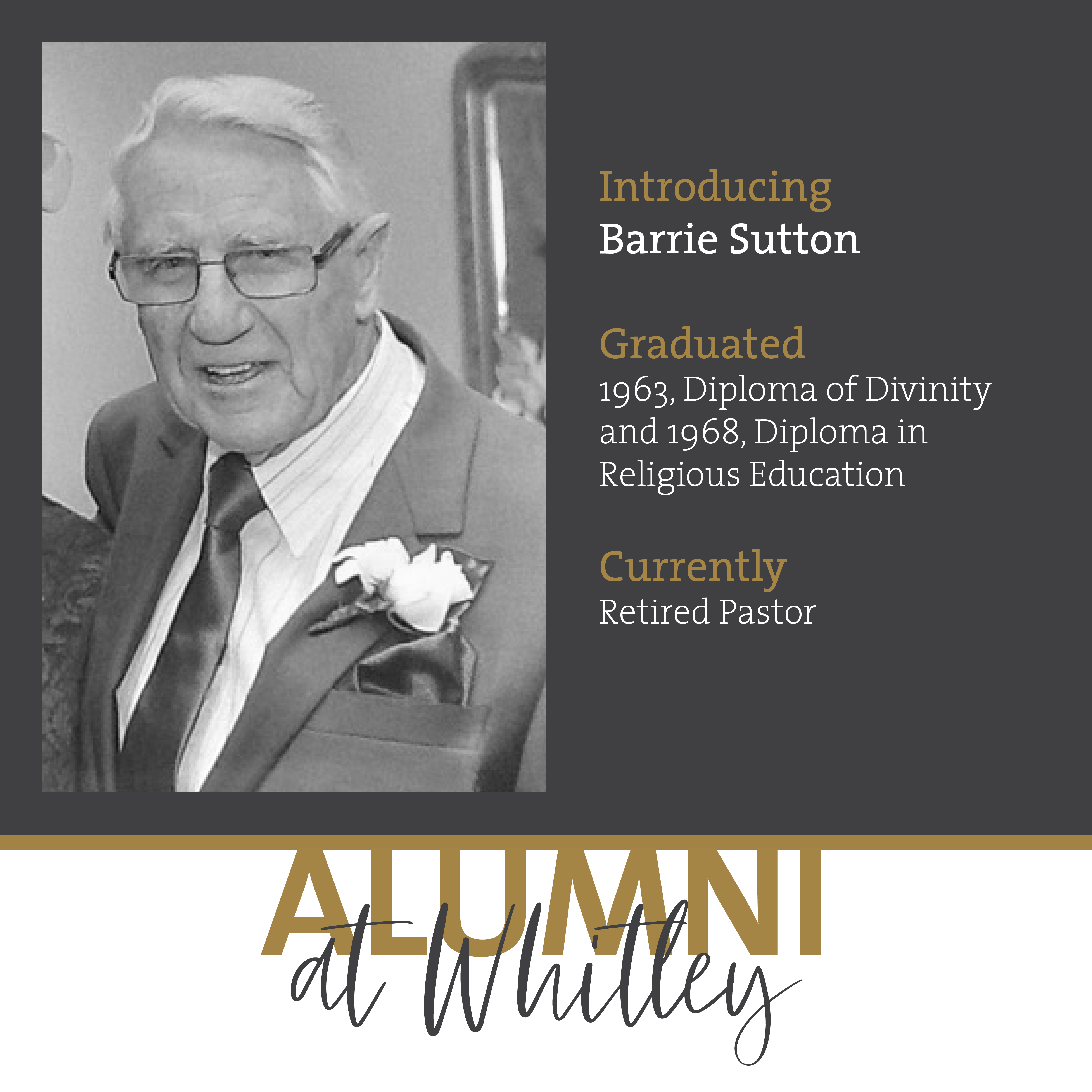 It was at the time of the 1956 Melbourne Olympic Games that the call to “full time  ministry” seemed to be pressing in upon me. I had been raised in a typical Baptist  family, father a loyal deacon at the East Camberwell Baptist Church – while I was the  Youth Secretary under a giant of a lay leader (Syd Gibbs).

I completed stage 1 of Accountancy, did National Service, and was employed as a clerk in a city office tower. Eventually – after the processes of the BUV, I was accepted to enter the Baptist College (Errol Street) to commence 4 years training under Principal Himbury, assisted by Basil Browne and Jock Watson.

Somehow I managed the challenge of Greek, NT and OT, Church History etc – and gained L.Th and Dip. R.E. while being Pastor at East Malvern (2 years) and a Youth leader Role (Oak Park) in my final year. I am forever grateful to the Baptist Family in Victoria who were game enough to invest time and money in equipping me for ministry. I married Julie in 1965 – a month later I was ordained in an inspiring service at a packed Collins Street Baptist. I believed that the calling to pastoral ministry would be my lot till retirement. How wrong I was.

Pastoral Ministry began in earnest at Ballarat (where I learned to umpire football) –  planting the church at Wendouree, then to Aberfeldie. The Vietnam war saw a change to  Military Chaplaincy, then pastorates at Townsville and Blackburn North (Newhope) and  Frankston Forrest. Ending in grief – “I was too much in favour of the “charismatic” – I joined the Public Service as a Community Corrections Officer – then Prison Fellowship, some fund raising with Vision Victoria, a number of short interim ministries – a serious surgical intervention (lost hearing in right ear but they got the tumour) and onto the pension – at 60! “You will never work again” was the medical verdict. But I was able to do some interims (only paid expenses) and from the age of 70 did ten years as a cruise chaplain with Holland America – and saw the world – from Alaska to Antarctica – Europe, NZ, and the Pacific. What a world! How good was that!

I am currently a Tour Guide at the MCG and carer for Julie who has Parkinson’s disease. But that is only part of the journey. The other part is what happened to me, and those of  my family – a talented musical wife and four children. They joined me on this journey –  from the time when we were very poor to now being pensioners – in a Retirement Village.

As we travel through the years – the circumstances, the people we meet – those with  whom we laugh and those with whom we weep, changes us. There comes a wider view  of the world, as we seek to learn from our mistakes and where we got it wrong.

I was called to ministry during the years that Billy Graham came to this country – and my  beliefs were then similar to his. I still have him as a role model, a man of God, who stayed  true to the faith for his 99 years. The greatest evangelist of the 20th Century. Having read  much of his writing and heard him preach (many times) now I would not always agree with  some of his views. On the major matters of salvation we agree, but I have become more  inclusive, less black and white in some areas. Hopefully, I will be as faithful as he was.

In my forties – God came to me in an amazing experience. In a quiet time of retreat –  Julie and I were seeking God’s direction for our future ministry. As I read from the  Psalms, tears came, and I burst forth in strange words. I was shouting and affirming my  desire to go where God wanted me to go. The effect was to know that God was with me  – I describe this as being ‘touched by the finger of God.’ I was aware, as never before of  His power and his love. In the years to follow – I needed that. We became aware of the  healing power of a loving God and so began a Prayer for Healing ministry when such  things were viewed with suspicion in Baptist circles. That ministry continues to this day.

My deepest joys in ministry has been preaching (using stories whenever possible), and  being with people in those watershed moments in their lives – time of sickness, death,  loss (in all its forms), marriage and the birth of children. Some of the most moving times have been weeping with parents grieving the loss of a child.

Today – there are some things of which I am sure – and some things to which I can only answer “I don’t know” “I am not sure” (and I am comfortable to say so). I am sure that God is creator of all – this is God’s world. God is loving, compassionate, forgiving, and wants peace and joy for all. I know this God performed “the greatest miracle of all – the incarnation” (C.S. Lewis). That anyone can reconcile to this “tremendous lover” (Francis Thompson). I am sure of the truth of the Bible – but thankful for those who taught me at College and in reading and studies since, that correct understanding of the truth requires a move beyond the literal in many of the writings of the saints. I left behind the literal Genesis view of Creation years ago. I know that God – and the risen Christ are with me and within us all. I know that this Loving Parent will not leave me to “face my perils alone” (Thomas Merton).

I give thanks to God for my 82 years and the journey that has been mine – I am convinced that living as “a follower of Jesus” (Allan Demond) is the way to live – for me and for everyone in the world.

(I have complied a book of stories I have used in over 60 years of preaching – mainly from  other writers, placed in sections (e.g.“Funerals” is the latest section) to be used as  illustrations in sermons, lectures etc.

It will not be in print – but is an eBook. It is titled “Tell Them a Story” and is free to  anyone who sends me a request via email. suttonb@tpg.com.au )