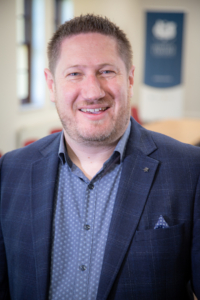 David is currently the Academic Dean at Whitley College. Previously he was the Higher Education Course Coordinator and Lecturer at Eva Burrows College, also within the University of Divinity. He has been involved in theological education and formation for more than 10 years in The Salvation Army and has also worked as the Assistant Dean of Studies in the past. David was involved in major educational and managerial shifts at Eva Burrows College and has strong skills in both online developments and educational pedagogy.

Prior to working in Higher Education he served in two pastoral leadership roles in churches in Victoria. He is a former member of the Tri-Territorial Theological Forum which encourages Salvationists to apply critical thinking and theology to their practical ministry and former editor of their Journal “Thought Matters”.