I’ve always had a real sense of the created world. I think that this has always inspired me. We built a house on the edge of Camperdown, in rural Victoria, where I farm three acres – growing veggies and fruit trees and running a tiny flock of sheep. I guess you could say it also partly inspired my Doctoral studies at Whitley, on the cosmos. 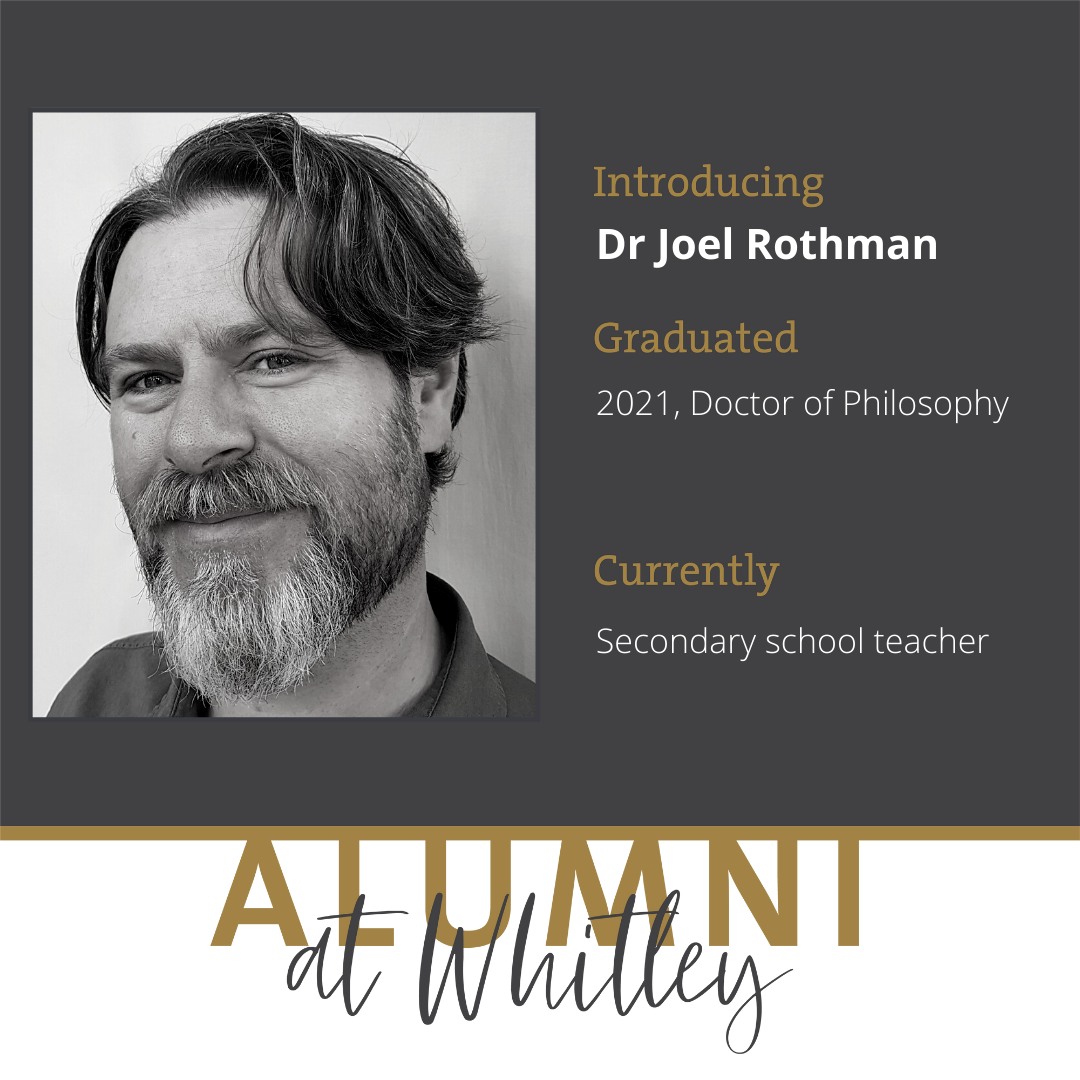 My name is Joel Rothman and I began at Whitley straight after my final year in high school. Recently, I was awarded my PhD. That was a great feeling and sense of accomplishment. There were times when I really wasn’t sure if I would pass. Prior to starting my thesis, I was a youth pastor at Westgate Baptist Church. When I finished there we moved back to near where I grew up. At about that time my wife, Louise, gave birth to our third and fourth children! I ended up essentially being a full-time dad, studying at the same time.

At high school I was always interested in science and the world around me. I grew up in a Christian house but around this time I experienced a kind of conversion. It made me perceive things differently. That was why I started doing theology straight out of school. I remember visiting two or three Bible colleges. Whitley appealed to me because I got the sense that it would push me to really question everything, and understand what I believed and why. Even to reshape my understanding to constantly seek the truth.

Before I went to college I was right into reading lots of books about faith and asking questions. I soon discovered questions faster than I could answer them. So I had to adjust to the idea of not knowing everything, or feeling that I knew everything.

I don’t think I have a single best memory from college. It’s probably just the repeated experience of going to electives and tutorials, and seeing the same students week after week or year after year. Those with similar interests to me … we’d end up in the same classes. It’s that sense of community. A sense you have permission to ask questions and discuss texts, test ideas, and even to argue because you realise ‘we’re on the same journey’.

It’s difficult to choose just one member of faculty but I would like to give a shout out to Keith Dyer who was there with me from the start. I did a lot of subjects in the New Testament with him in my undergraduate degree. And then I did something in the book of Revelation back in 2002, which really expanded my understanding of Christian faith. I think it informed what I ended up doing for my thesis. Keith was my primary supervisor. You could say I’ve been studying Revelation with Keith Dyer for a significant portion of my life!

I began my PhD in 2012 and it was quite challenging. When I was able to make the time to do the study I really enjoyed working on it. I found the subject matter fascinating and that’s what drove me. My thesis was called Cosmology and the Cosmic Journey in the Book of Revelation: the experience of story-space and conflicting visions of reality. The feedback has been encouraging and I am in discussions with a publisher about turning this into an academic book.

At the moment, for a job, I’m looking at secondary teaching and have been dipping my toe in the water in the local Catholic schools. There are more Catholic schools around the place than Baptist or Protestant ones. I’m enjoying the vibe of some of these Catholic schools. Even the way they do religious education. It’s a bit of a different perspective but there’s quite a lot of overlap.